The morning was freezing cold, damp and foggy and a doctor was on hand in the airport terminal, checking over randomly, the new Caribbean arrivals.

None of my group of eleven, had experienced genuine cold and we shivered and our teeth rattled – our first taste of a British winter in early February.

Our clothing was totally inadequate for that time of the year.

I wore a smart new cream suit complete with tie and highly polished shoes but no heavy winter coat. I also had a couple of woollen vests and a light cream mackintosh, in my medium size suitcase.

Thereby, began a love for hot English tea and bars of chocolate. Bars of chocolate were obtainable at six pence sterling or 2.5 new pence (decimal currency) a bar, from the confectionery machines, proliferating then, on many underground and over ground station platforms.

The tea warmed your inside and you could now afford to purchase any number of chocolate bars.

Though I had tasted and quite liked Cadbury chocolate, the cost was beyond what I could comfortably afford from my teacher’s earnings, in Barbados. 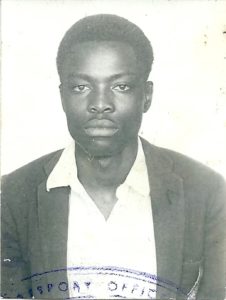 My lasting memory of the place I was leaving on that Boeing 707 jet, were

the hugs, handshakes, tears, longings, promises to write often, based on little more than wishful thinking, apprehension and a steely determination to succeed whatever lay ahead.

The plane taxiing slowly at first, permitting one last look at siblings, parents, relatives, a

former friend, Colin – on the airport viewing platform, before  the powerful Rolls Royce Olympus engines roared fully into life, accelerating the plane to its maximum speed for

‘take off’ and for me, the realisation, that life might never be the same again.

I sat next to a beautiful Bajan lady, on a journey to Manchester to study nursing.

We talked and amused each other throughout the flight, except for the time when I alone slept through a spell of turbulence and woke up with my head resting on the lady’s upper torso. She scarcely batted an eyelid and merely commented on how soundly I had slept through what was to her, a really frightening experience.

I have not seen or heard from my flight companion since parting ways, in the Booking

The first day in London might have been my last. I felt so alone, cold, miserable, missed family and close friends – longed for the warmth and freedom of life in Bimshire (Barbados).

Forty hours previously, I had spent my last Saturday night Barbados with some close friends, feasting on Bajan coconut bread, black pudding and souse, mauby, enjoying ‘belly laughter’, anecdotes and inwardly, contemplating about my sweetheart being left behind.

I especially missed my siblings and wondered why I had left my island home.

The Black landlord was unwelcoming, rude and lacked empathy.

He had the audacity to ask for some bajan cake or sweetbread, but got none.

Is he still alive!

I was alone and in a depressed state for at least an hour.

A greeting card from a youngster, which I must have overlooked while packing, contained a message that  once read, immediately lifted  my spirit and created within me the desire and determination to rise to whatever challenges I may face.

Fascination over children being dragged through the snow by parents, while the family pet was carried in a push chair, partially covered by a blanket and well protected, the apparent speed at which people walked compared to the lazy gait of people ‘back home’, newspapers that ‘sold themselves’ at stations or in front of Lyons tea shops proliferating central and outer London; the novelty of being responsible for myself, shops at every street corner, experiencing bitter cold and dense fog, paying three shillings or fifteen pence in today’s money, for a three course meal – made life interesting in those early days.

I soon got to love my new life as a West Indian in UK.

You learned fast in those not so halcyon days.

I settled soon in a lovely church and got to know some wonderful folks.

I was invited to spend my first Boxing Day in UK, with a lovely family – afterwards, we played football on nearby Shirley Hills.

Life on the London Underground, lasted a contractual year and was eventful. I still

remember with gratitude, the retired English gentleman, a perfect stranger,  who stopped his car and then gave me a lift to Morden depot from  Rose Hill, Sutton, at 0555, on a February morning, when neither the staff train from West Croydon to Sutton, nor the staff bus from Sutton garage to Morden Underground station, turned up. The first train was then due out at 0600 and I was part of the crew. No cover was available.

I heard of a Bajan who having left the Underground and emigrated to USA, returned to UK years later and asked after me unsuccessfully, as he explained, to return some small favour, I had unknowingly and unwittingly, afforded him.

Never liking the transport sector, I took a test for the Post Office, then part of the Civil Service, scored highly in literacy and numeracy and was interviewed on the same day for a job as a Postal and Telegraph officer, which sounded grander than it was.

I was alarmed to be informed that were I “to do well in my new job, the Service Commission would consider employing other Black people”.

I remained a very restless employee even when I worked in an office overlooking St Pauls Cathedral.

I wondered even then whether that edifice was built on the ’backs of the slaves’.

The City of London fascinated me and I certainly liked the dress code of the city gents.

Lunch times were often spent rummaging through bookshops, walking along the still bomb damaged streets and alleys to the banks of the River Thames, joining my Asian friend in shopping forays in Old Street and when excavation work started next to where I worked, observing archaeologists at work on what used to be a medieval burial site.

The reality of what I was up against, made me even more determined.

I got through two executive promotions interviews, the latter included the use of a car- a first, it turned out to be! Though protracted delays and inaction, made even that, unrealisable.

Does my record of obtaining “the highest naval exams mark ever” and a record throw of a heaving line, still remain intact?

Armed with a degree in Social Sciences and a post graduate degree enabling me to teach maths, I entered the teaching service in the late seventies. Later added two further pieces of paper qualifying me to teach adult maths.

Life as a teacher was excellent.

Fast forward – I returned to Barbados in 1981 and on the way to Black Rock via the Lodge Hill, did not even recognise the places which I knew well, in my youth.  Enquiring why we had taken so long to pass the Drill Hall, Garrison, where I had spent three happy years at the relocated Combermere School for Boys, I was informed that I was just five minutes away from my parents’ home, in St Stephens Hill.

It has been a journey, which I have enjoyed.

Fast forward even further- Dad and Mum are resting in deserved peace, unaware that there are now seven doctors in the family and the second generation Halls are emulating their elders.

I have a loving family, am proud of my siblings and their achievements, love my nieces and nephews, am older, much experienced and probably wiser than when I left my Island home all those years ago.

Throughout the journey, I placed my trust and hope in the Almighty always. He never once let me down.

“In the moment of decision, may you hear the voice of the Creator saying, ‘This is the right road, travel on it.”
― Lailah Gifty Akita, Pearls of Wisdom: Great mind