THE West Indian Families and Friends Association (Wiffa) started in 1985 with a small number of members. Over the years the Association has changed and grown. Below, Mr Tony Sandiford, one of its founding members, looks back at Wiffa and how much it has changed since 1985.

THE West Indian Families and Friends Association (now referred to as Wiffa) has its genesis in the fact that a group of people saw a need especially in the South West area of London to set up a social organisation drawing on the diverse cultures of Caribbean people. 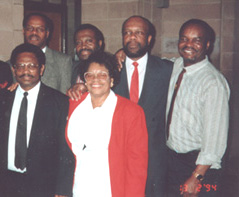 London has always been portrayed as a busy and impersonal place to live and work. It was of no great surprise that the early immigrant population had set up their own individual islands and school Associations, however there was no such place for those who did not belong to one of those institutions or so it appeared. What it did show that there was a lack of inter-island Social and Cultural Interaction.

The founders of this Association set out to redress the balance and took some inspiration from the unsuccessful bid to unite the West Indian people by way of a ‘West Indies Federation’ which had been formed but sadly abandoned 25 years previously.

It was generally felt that unity and fellowship among Caribbean groups could be encouraged by way of sharing common ideas, examining common needs and promoting social, cultural and educational activities which would be beneficial to all. This Association could set a high standard which could serve as a benchmark for others to follow.

There was a realisation amongst the founders that the issue of becoming one people, promoting goodwill and unity was still a burning ambition for some of our political leaders in the West Indies. The then Prime Minster of Barbados, Tom Adams, was at the forefront of this movement.

It was of some significance to the group that during the early planning stage that Tom Adams died suddenly in Barbados March 1985. His untimely death provided the impetus to put our plans into reality – a fitting tribute to his memory!

In early May 1985, Tony Broome, Tony Sandiford, Neville Blackett, Philip Roach, Ervine Scantlebury, Darcy Farley, Winston Hunte, Sylvester Best and Joe Headley came together and formalise plans for officially launching the Association. The name West Indian Families and Friends was chosen, since it reflected that feeling of an embrace intended. A self-elected committee was formed to carry out the duties for the first year.

It was agreed that the mission statement should highlight Caribbean issues and the Association would be opened to anyone regardless of their origin.

The aims set out were very clear in that the intention was:

A constitution was constructed and the Association was officially launched on 5th June 1985 at private premises in Aytoun Road, Brixton, SW9 as a non-profit making entity, with an initial outlay of £200. A monthly membership of £5.00 per person was agreed. With membership not restricted to any particular type of individual.

Women were not given full, but affiliated membership. This was meant to be a goodwill gesture allowing women freee membership. However, this was changed a year later when it was realised that the constitution did not allow affiliated members to have a vote on any relevant matters pertaining to the Association.

The Association had no fixed meeting place hence meetings were held in various public houses to include the Red Rover in Putney, The Railway Bell, in Tooting, The Red Lion in Colliers Wood, The Beaufoy Arms in Battersea, The Cricketers in Mitcham, where we found the various publicans very accommodating. Later St Augustine’s Church Hall in Tooting was to become our regular meeting place. Committee meetings were held at individual private premises. 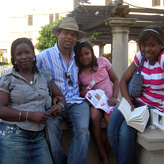 From its earliest days a strong spiritual bond deeply rooted in the Church and especially St Augustine’s was established. The late Vicar of the Church, Serafin Lopez, who in some ways acted as an unofficial patron of the Association together with some of his small congregation at the time were always encouraging the members to worship there. The threads of this bond have become even stronger over the years. This is evident from the fact that today many of our members worship there and indeed form a majority of their church committee. The Association hosted its first Thanksgiving service there in 1988 when the Rev Tyrone Lewis a visiting clergy conducted the service and has continued every since. Indeed, St Augustine’s is often referred to as the Wiffa church.

The trend of moving around the area for our meetings continued until 1989 when we were able to occupy premises for our meetings at The Vestry Hall, London Road, Mitcham, a building which is owned and managed by the London Borough of Merton and was opened to the voluntary sector in 1988.

The Association hosted many Social, Cultural and Educational activities in the ensuing years in the community. The excursions to the seaside brought a breath of fresh to the lives of people in the South West of London. The Association was always present at the various cultural fairs held in the Borough of Wandsworth and Merton. These events helped to promote the different cultures of the Caribbean people. One of the highlights was the Association’s performance at the ‘Dance in Harmony Festival’ in partnership with the Ethnic Minority Centre, which was held at the Commonwealth Institute and televised by the BBC.

The regular use of the Vestry Hall has given the Association a firm footing in the Community and recognition from the Ethnic Minority Centre and the Merton Borough Council in general. Today, West Indian Families and Friends Association forms a great partnership with many other departments and organisations in the borough engaging in the promotion of a better understanding of diversified issues.

In continuing its tradition with the Church, The Rev Canon, Dr Sehon Goodridge, the principal of Simon of Cyrene Theological Institute and a friend and follower of the Association was asked to become Patron of the Association and gracefully accepted. Three years later he went on to become The Bishop of the Windward Islands in the Province of the West Indies. He is still the only patron to the Association. It was the same year that the Rev Trevor Davis became the Chaplain.

The Rev Sonia Hinds visiting from Barbados officiated at the Annual Thanksgiving service, encouraged the Association to further interpret the initials Wiffa as ‘When Inspired (there is) Fellowship For All’, since then that has become the ‘motto’.

In a sermon in 1996 the then Bishop of Croydon Dr Wilfred Wood encouraged the executive to adopt the St Barnabas as its Patron Saint. This was immediately agreed on. Since then the annual Thanksgiving Service has always been held on the Sunday nearest to the 11th June, which is St Barnabas day. It serves as a reminder that every year you will know, even without a calendar, the date of the Wiffa Thanksgiving Service. This combination of thoughts have ever since been written ‘St Barnabas the Saint of Encouragement’, who promoted an atmosphere ‘With Inspired Fellowship For All wherever he went.

Since then the Association has been operating a drop-in centre at the Vestry Hall weekly, promoting the atmosphere where unity is recognised. Advice and information on most topics can also be obtained.

Albeit temporarily, the Association has been able to acquire accommodation in 2003 in the borough of Merton by way of the partnership use of the refurbished Taylor Road Centre. Amongst other activities are our keep fit classes and social gatherings.

The remodelling and relaunching of our new website in 2004 by Miss Andrea (firstly launched in 2002) has brought us further up to date with new technology.

As a result of our stability, the Association became a Limited company in 2003, having two directors and a company secretary. This followed two years of consultation with professionals, who helped to convince members that this was an appropriateand beneficial step which would further enhance the reputation of the Association.

Education, welfare and health policies were set up over the years which are closely monitored and revised from time to time with full consent of the Association.

In January 2003 the Merton Drug and Alcohol Action Team commissioned the Association to carry out a Needs Assessment Survey on Drug Use and Service Provisions amongst the Caribbean groups in Merton. This was part of an awareness programme, which looked at all BME Groups in the borough. The findings were submitted and various recommendations were made which in turn served as a platform for other drugs awareness projects in which the Association is involved.

The Association is also engaged in various partnerships in the London Borough of Merton working with the Ethnic Minority Centre and many BME groups in the community. It has also published a Statement of Intent and an Equal Opportunities Policy.

In August 2004 an Internal Educational Scheme was set up in which every member of the Association was given the opportunity to take up a grant aided vocational course in which not only the Association but the individual could benefit from. This has in some cases been extended to family members.

The Association boasts an internal welfare programme from which not only members but also friends can benefit. This is not always in the form of a monetary contribution but also in the sharing of information beneficial to the community. To this end various health seminars have been held.

Over the years regular monetary contributions have been given to various Charities and Aid Societies here in the UK and abroad. Although the Association has set out an annual budget of £500 for charitable donations, amounts ranging from £100 to £2000 have been given to single charities. In the past three years donations have exceeded £2000 yearly, with one of our recipients the NSPCC receiving in excess of £2000. The Hurricane Disaster appeals have always benefited from the Association.

The involvement of the members at all levels ensures that the aims of the Association are met. They are all proud of their Association and experience the friendly family atmosphere that manifests itself throughout.

The Association is indebted to its many followers for their support over the years, the London Borough of Merton and the Ethnic Minority Centre who have given a temporary home by allowing the use of their premises for the past 16 years.

Despite present accommodation being in enjoyable and comfortable, the Association has not lost sight of the fundamental principles on which it was formed. Many of the aims are being fulfilled but the purchasing or leasing of a building remains of paramount importance. A legacy must be left for those who follow!